Blue Base Arowana Fish, also called Malaysian golden blue base cross back Arowana. The Crossback Golden Arowana originates in Malaysia. They have a rich golden appearance often contrasted against strong base coloring. The Blue base variety has been specially bred and selected to have a striking Blue Base Color contrasting against rich golden scales. Known as the Crossback due to the golden color crossing over the 6th level of scales (the very top of the back) creating a full-bodied and complete coverage of color. They develop color very early on, often having very distinct scale colors of 8-10inches. These are a stunning and majestic variety for any Arowana keeper. Pictured a Unique Variety of Blue base Golden Crossback supplied by Panda – sold separately in our shop.

Buy Blue Base Arowana  The Premium blue base are so classic and beautiful. their sizes range from 5-32 Inches long and can grow up to 35 inches in feature. They all come with quality guarantee certificates, permits, certificates of authenticity, certificates of origin, and Cites.

In The Wild: Arowana Overview

Arowanas are a species of fish that are part of the ancient family of osteoglossidae. This group of fish is sometimes (rather strangely) called “bony tongues” because of a toothed plate of bone that they have on the lower part of their mouth. Inhabiting the inland waters of South America, Southeast Asia, and Australia, these fish have elongated bodies covered with large scales and a distinct pair of barbells protruding from the tip of their lower jaw. Because of their looks, Arowana is also sometimes known (especially in Asian countries) as “dragon fish” or “Shui long” in Mandarin. Folklore tells us that Arowana brings luck since they resemble a traditional Chinese dragon. They’re highly predatory fish that you’ll often see elegantly patrolling the surface of the water.

Arowanas can live over twenty years in captivity. That’s more than most domesticated dogs! There have even been unconfirmed reports of Arowana living for nearly FIFTY years. With that in mind, there’s no denying that keeping an Arowana is a long-term commitment. Probably the most sought-after and popular freshwater monster fish in the world, the Arowana even makes an appearance in literature and is cited as “the world’s most coveted fish” in the book The Dragon Behind the Glass by Emily Voigt. 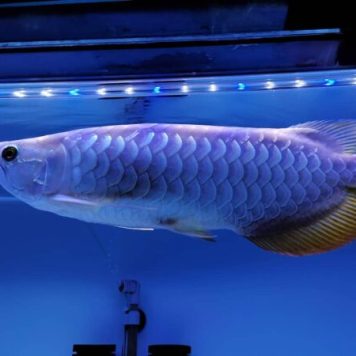